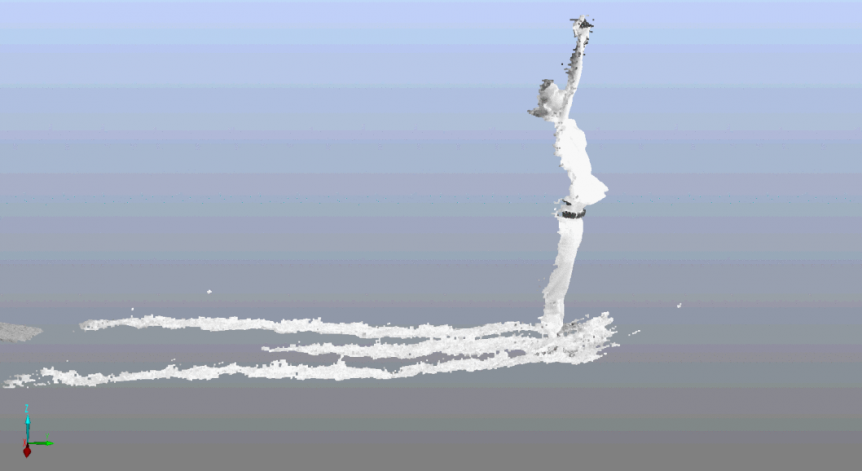 About 20 years of that coalesced into the question, ‘I wonder what vocation one could have that would sort of combine all of those things; excitement, fiscal stability, something interesting and meaningful.’

I remember the first day I saw the laser scanner set up in our office. Some of us were like kids at Christmas. It was all we talked about with our friends and families, who really had no idea what we were talking about. It was exciting. The promise of a very profitable medium became our vision. We began thinking of ways we could teach others how to leverage this amazing technology for a variety of applications. We could scan landscapes, buildings, artifacts, machines, people… and we did. But alas, buy-in from potential clients was simply not happening. We had done our research, but found that after a scan was done, clients decided they really didn’t need another one for, well…indefinitely.

We were a little perplexed at this. Everyone we spoke to agreed the technology was pretty jaw-dropping, but, jaws in hand, that was usually where the conversation ended. At the end of the day, the feedback we typically received was that it was “an overkill.” They could not justify the cost of such an instrument simply to measure a few (million) things. Some of our more risk-taking clientele thought it would be useful if we could snap a 3D model out of the “point mess.” But, that was not quite as simple as everyone had hoped (years ago). There we were with over $80k worth of equipment and software, and a thin market that was not quite ready for what we had to offer.

Perhaps some of you readers can relate, perhaps some of you found success immediately. To the latter, I commend you. That just wasn’t our story. We worked very hard to make this product viable in the eyes of our clients. We found a multitude of applications and hit home on a few, but I can’t count the number that did not come to fruition; The contour app for golf greens, developed by laser scans (that we soon discovered was welcome by a very, very small demographic – most of them between the wide age range of 12 to 13); The animated water on laser scanned, DTM extracted roadways (before we knew how to remove noise) which resembled class 5 rapids running through the Rocky Mountains; And among my favorite – “the torpedo room that never was” (thanks to the opaque black metal paint on this historic submarine’s ammunition, which resembled a holy doily more than a robust torpedo).

But, several thousand laser scans later, we’ve learned a few things. The first rule has been to never quit and never stop learning (and carry baby-powder). Our team took the laser scanner home, to the beach, to their vacation getaways… We had to check in with each other to see if the scanner was free for the weekend. It brought some of us closer and moved some of us apart to other companies. It was kind of a crazy ordeal actually. Ultimately, we all wanted the same things – a great product and a thriving business. There is more than one reason, I believe, that scanning technology has been labeled ‘disruptive’.

BIM is no different in its psychological dynamics. We have that adoption curve staring this industry down again: adopters and hold-outs attempting to make the best decisions possible for their business, employees, and livelihood. The ball is rolling, clearing a new frontier for all of us. For the hold-outs in the AEC world, your budget may say no, but this is a good investment this time if leveraged in a way that everyone obeys the model and the information therein. This technology may seem like science fiction, but it’s here and has been here for years – and it’s ok if you’re just now hearing about it!

Today I received clearance to laser scan a government building – not the first, nor the last. My clearance is no secret since I will be wearing a badge and moving a laser scanner around in downtown, open public, Portland. I will receive many questions about what I’m doing, what I’m using, and what the whole point is. I will give my 1-minute spiel and wait for their reaction, which is usually a smile or a head shake followed by a comment like, “My, how far we’ve come.”

They have no idea.