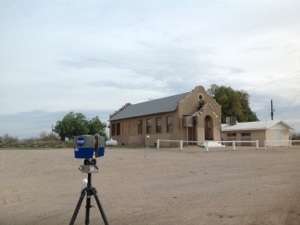 In March, 2013 I was afforded the opportunity to laser scan and create DTM models of two properties in the Gila River Reservation about 40 minutes south of Tempe, Arizona – home of Arizona State University. As I picked up my 150 lbs of scanning equipment and luggage at the Phoenix airport, I was immediately greeted with the climate of 80+ degree weather and sunshine – a welcome contrast from that of Oregon, my home.

Phil Allsopp, M.S.(Public Health), D.Arch., RIBA, FRSA, Principal and co-founder of Transpolis Global, Inc. was my point of contact for the project and, by his own admission, was enthusiastic about using laser scanning technology to survey these project sites – which would later become a new community center and a net zero energy farm dwelling. As a designer, Allsopp has been involved in Building Information Modeling since before the term ‘BIM’ was coined. 3D modeling with ‘intelligence’ was at one time simply parametric modeling, which had its roots in the UK as early as the 70’s – about the time Allsopp was becoming involved with this sort of software. His current tool-set includes ArchiCAD running on Apple’s OSX operating system; a sweet combination for modeling and graphic processing power. When not designing community centers, Allsopp has his hand in some very important sustainability issues that the Phoenix region is wrestling with. Currently, Phil is a member of Phoenix Mayor Greg Stanton’s Sustainability Advisory Committee which is helping to reshape the City of Phoenix’s regulatory policies to help create a more livable, healthier city focused on diverse communities and a diverse economy..

After we connected over coffee and a very brittle pastry that I mostly wore rather than consumed, we headed deep into the reservation to the project sites. As we were driving, Allsopp pointed out designs along the way that, to the untrained eye, appeared pleasing enough. However, my perspective was widened when he referred to the fact that most of the sidewalks and residential homes did not have any trees or shade around them whatsoever. In the area of the Gila River Reservation, temperatures can soar to 120 degrees in the summer. He also pointed out that most of the structures on the reservation were built using concrete block with minimal internal insulation, becoming unhealthy hot boxes in the summer’s of this unforgiving climate, even with the costly air conditioning running 24/7.

As we drove further, elementary schools with razor wire around them and graffiti on nearly every street corner began to paint a picture of the social condition of the ‘Res’. During the week, I would learn a great deal about what the community of Gila River was up against systemically, and what Transpolis was doing about it to help move the community forward. Leveraging 3D technologies such as laser scanning and modeling are the first steps toward creating a sustainable design in a short amount of time and with a sense of urgency.

Toward the end of this particular project, Allsopp and I sat down for an interview in his Scottsdale home decorated with a library of thousands of books he and his wife Dr. Lauren Allsopp, Ph.D. Architectural Conservator, have collected over the years – the subjects of which range from historical preservation methods to social responsibility for a better planet. It was clear to me that this was indeed their life work. And, that they absolutely believe in it.

While this interview revealed some very somber and tragic systemic issues, there is in fact an enormous amount of positive momentum in the current climate of this Native American Community springing from the new, contemporary environmental designs underway that support healthy and supportive human habitat. New technologies to include laser scanning, are playing a key role in this process and continue to expedite the long-awaited change for this future, thriving community.

The following excerpts come from this interview with Dr. Allsopp. This in-depth interview will be divided into three segments [originally for LiDAR News].

An Interview on the Res

Tice: Tell me about the origins of your involvement with the Gila River Indian Community.

Allsopp: We’ve been working with the Gila River Indian Community for the last 2 1/2 years. It all started with perhaps a bit of serendipity. We (Transpolis) are playing an increasingly prominent role I think, helping the Gila River Indian Community to get a better handle on how it provides education, human habitat, housing and how it puts new programs in place to encourage greater entrepreneurialism within the community, greater employment, and so on.

Tice: Are you working with the city directly with the city council, or the tribes? How is your involvement directly related to the people [of this community]?

Allsopp: [We are] working with the counsel of elders, with the Gila River Business Association, and with Ramona Farms; the largest privately-owned farming organization on the Gila River. We are also working on a little project in District 4 of the Gila River Indian Community – the Stotonic Presbyterian Church. We have here a very old adobe church we want to preserve and also a new building they actually want to build. (This church is part of the design/build project that will be leveraging laser scanning technology).

Tice: Are the people in this area taking you in well? Are they appreciative of your efforts to restore some of these structures?

Allsopp: Yes. The relationship with the Gila River really started by accident…I was asked to give a talk at ASU early one morning on corporate social responsibility. In the audience, there was a member of the Gila River Indian Community named Antony Newkirk who runs Mobile Nations Technologies for the Gila River and is Vice President of the Gila River Business Owner’s Association (GRBOA). He was concerned, as was I, about net neutrality; making sure that the digital divide is as small as possible. 2-3 weeks after the talk, we exchanged emails and later, he called me up and asked to go to lunch. He asked if I had seen the ‘Res’ and that we should take a trip around the Res and go see his aunt. We went through some pretty rough neighborhoods on the way to Sacaton, which is the capital and met with his aunt, Mary Thomas – the former governor of the tribe. We hit it off and later I was asked to become more involved with the business owners association. Antony asked me to give a talk on some of the things that we do and while there I met Danelle Spring, a very eloquent and passionate lady who is also the secretary of the GRBOA. They asked whether Transpolis could apply our approach to design and habitat which is always seeking to positively impact community, economy and health. I offered that we could help them there, but that we would be looking at housing in a different way than has been the norm for the Gila River Indian Community. For us, human habitat isn’t just about a building. We challenged ourselves on whether we could use the act of re-shaping how we provide, design, build and maintain habitat; could we use the act of doing that to influence positively, behavioral health, employment and education…

So, we spent about a year meeting with various departments in the tribal districts in the Gila River (there are 7 of them), talking to them about different ways of looking at housing. We received a tremendous and positive response. People were saying things like, “We don’t need a 3 bedroom house,” as I recall one of the older ladies saying. “All I need is a cooking space, a place to entertain my family, and if I had a sleeping alcove with a curtain, I’d be perfectly happy. We don’t ‘need’ these houses that they keep building.”

We heard all kinds of anecdotes. We heard dreadful stories about people having their trees that they planted to shade the house – having those trees destroyed by a bulldozer one morning and being informed that they were going to get a new house and be moved out of their existing house, and that they should be very happy about it.

So, we began to build a picture of complete dysfunction of how housing is currently provided and the effects on community that this process has. The physical houses themselves don’t perform very well at all. They’re based on an Anglo model of living; the 3 bedroom, kitchen, dining room model. The tribal members get one of these houses which moves them further apart from the way they used to live. For example, they used to have places where they could have elder, younger, and core family members (mom, dad, 2-3 kids) all in one area, but not under one roof. 18-21 year olds might have a little separate space nearby. The elders might also have something close by. The main family would gather for dinner in the main house, but there was a degree of independence and closeness at the same time. Along comes HUD and says, ‘We’ll give you housing, but the housing has to be under one roof and it has to be an Anglo model so that it meets our resale criteria.’

Over the last 2 years, we’ve built up a set of insights, which underscore the unnecessary pain the tribal members go through as it relates to housing. It doesn’t relate to them at all. There’s a reason I think why the houses are not looked after (in a dilapidated state) because no one takes ownership, no one is given the opportunity to take ownership for their own habitat.

The relationship (between Transpolis and the Gila River Indian Community) has really been one of help and advice more than anything else. [I can say] we never went there thinking that somehow we could get a contract to do a lot of work. We knew we couldn’t work pro-bono forever, on the other hand, the plight of the community was so bad we felt compelled to stay the course as many business leaders and elders were, trying to make a better world and hang on to the idea of community and build from it.

That’s where we are right now with them. We are working on more projects with them [as well] and these larger initiatives are in fact going forward.