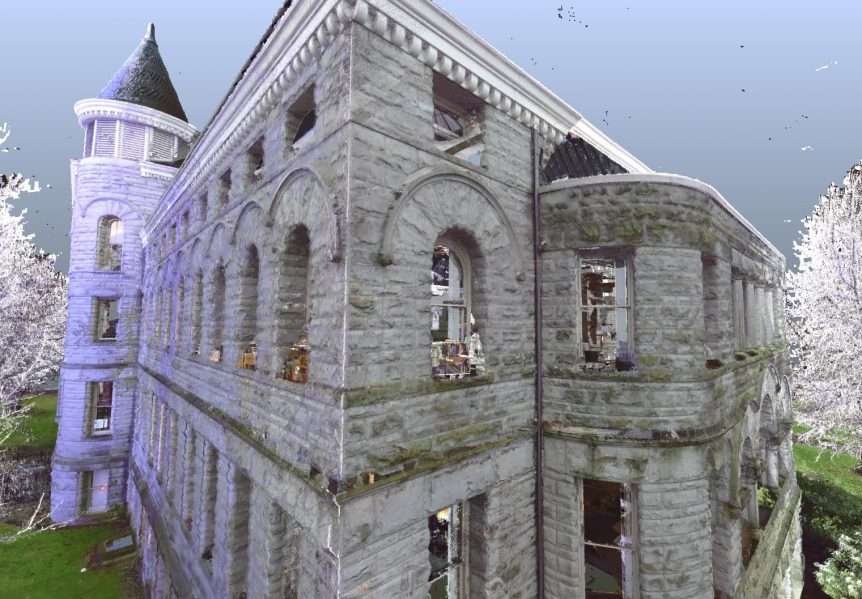 Growing up, I was enamored with knights, chivalry, swords and castles. I can’t tell you how many times I watched movies about Merlin or how many hours I’ve logged on books relating to medieval history, dragons, and the like. That being said, it has been very exciting to work on projects involving historical preservation. This particular project certainly is no exception. What this project also demonstrates is the versatility of laser scan data for documenting historical infrastructure. While this is a snapshot of a project, it also may be viewed as a real-world augmentation to a pre-existing workflow.

In a collaboration with Peter Meijer Architect, PC (PMA) and ToPa 3D, we set out to leverage scanning technology to evaluate the overall condition of the Old Capitol Building, also known as “The Castle” in Olympia, Washington.

A Legacy of Service and Perseverance

This extraordinary architecture has seen at least 2 earthquakes, and served as a public service building since its design by Willis Ritchie and construction in the years 1890-1892. Appropriately named, the “Castle” is a multi-story, massive work of art. The immensity of this structure exudes a feeling weight and solidity paralleled to few structures in the Western United States. It is both majestic and pragmatic in design, especially with the remodeled natural wood interiors of exposed lumber serving as a beautiful space for State employees.

The building is listed on both the State and National Registers of Historic Places.

[At one time], the building featured a 150-foot-high octagonal clock tower with clocks on each of its eight sides. The earthquake of 1949 resulted in the loss of 10 of the 12 towers and eliminated the rotunda at the East Wing center, the House chamber and related galleries at the south end of the East Wing.(1)

The dominant design is the Seal of the State of Washington, etched on flash green and clear glass [on the western facade]. The panel is constructed of both European and domestic sheet glass, and lead and zinc strips, with an outer perimeter of beveled glass, all held in an oak frame. The outer borders blend into the architectural embellishments of the structure and compliment the interior and exterior of the building. (1)

ToPa 3D was contracted to provide 3D imaging to assist in several objectives for PMA’s historical analysis including;  provision of laser scan data for adjustment of a Revit model to as-built conditions, WebShare data generated by FARO Scene software to provide the ability to precisely mark-up the facades with notes, in a 3D virtual space and, to provide simple measurement capabilities for the overall structure. ToPa 3D also provided scan-generated orthophotos of the site that were scaled to the Revit model for rapid accuracy checks – without burdening the software with dozens of scans.

ToPa 3D over a 2-day period laser scanned the Old Capitol Building using the FARO Focus3D scanner ensuring to capture at least 90% of the structure accounting for occlusions caused by surrounding vegetation. Spherical targeting was used on the park lawns to ensure there would be no obstructions to the exterior facades. One of the obstacles encountered with scanning was the Northwest weather we Natives have grown accustomed to: Rain, and lots of it. This proved a problem for the scanner as the water on the metal roofing refracted laser returns thereby leaving large occlusions in certain areas. Some of this was overcome simply by rescanning the following day during a weather break – although, this is not always possible. Fortunately, the majority of the area of interest was the facade walls, fenestrations and stonework. Overall the scan data achieved 1/4″ accuracy and was registered to local control.

Processing scans through FARO Scene was quite efficient and
produced excellent registration, noise reduction, and overall processing without issue. With the use of ‘Scan Point Cloud’ and ‘Project Point Cloud’ tools, visualizing the overall structure in context was painless and useful for creating the orthophotos with the new clip-box features.

Clip boxes in FARO Scene were a great resource since we were able to use multiple boxes to mask out vegetation that had grown up against the side of the building. Scanning from multiple vantage points in combination with clipping in this way produced very workable results.

Scans were also delivered through FARO’s ‘WebShare2Go’ (now ‘Scene2Go’) format, allowing PMA to perform extensive, precision mark-ups for the facades; which is proving to be a rather useful alternative to a clipboard and 2D drawings for field walk-throughs. Simply loading WebShare2Go on a laptop or remoting into an office PC with an iPad can provide a clear, interactive medium to view and analyze the building – often with greater accuracy than original drawings since the imagery from scans is photorealistic.

Scan data is proving its ongoing viability in the workflow of facade analysis and it is my ongoing privilege to be a part of this process. In the words of Romanian-born sculptor Constantin Brancusi:

For “The Castle” project, we couldn’t agree more…

2.         Peter Meijer Architect, PC (PMA) integrates design, science, and preservation. PMA is committed to the reuse and adaptability of existing architectural resources and the preservation of historic environments. To learn more about PMA and their work with historical preservation please visit their website at: http://www.pmapdx.com/