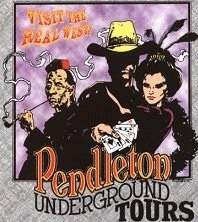 A few years ago, I was approached by the Director of the Rivoli Theater Restoration Coalition from Pendleton, Oregon. He had seen a few of the point cloud visualizations our team put together for the Petersen Rock Garden in Redmond, Oregon, and decidedly told me that the Rivoli could benefit from this sort of marketing. I was immediately excited to know that people were beginning to hear about our historical preservation project and wanted a piece of it for their own areas of interest. I told him I would absolutely drive to Pendleton, home of the Pendleton Round-Up

Where we are today

The Rivoli also used to be on the Restore Oregon – Most Endangered Places list which made her the ideal candidate for 3D documentation (as a result of this effort and many, many others that have contributed to this structure’s survival, this story has a happy ending).

I wrote this blog from a motel in Pendleton. On that day, we began the 3D documentation process with volunteers from the area. It was a great experience.

So what can we learn from the Rivoli? A better question may be: who is the Rivoli about? What are the stories that are hidden in its walls? Underground? Perhaps I failed to mention the Chinese Tunnel system that runs beneath it?