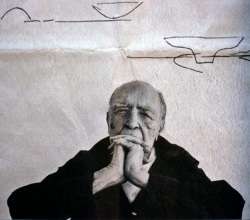 It often takes a lifetime for the world to notice what was once only visible to a few; the brilliance of a master’s achievements. While Oscar Ribeiro de Almeida Niemeyer Soares Filho passed away, he left a legacy of architecture that was instrumental in shaping the modern movement – what may be termed “functional” architecture. [This] modern architecture began at the turn of the 20th century with efforts to reconcile the principles underlying architectural design with rapid technological advancement and the modernization of society. His designs brought about what art philosophy terms an ‘aesthetic experience’ for the cultural phenomenon known as our modern city.

Contributing to the forward propulsion of an idea brings about a sense of our collective desire to move into a better and more interesting existence as a species. We remember our history to learn from and be inspired, applying these ideas to our future. In the realm of historical preservation that this author has been exploring over the past several years, I’ve experienced dedicated organizations working diligently to facilitate the remembrance of our past. One such organization known as DoCoMoMo (Documentation and Conservation of the Modern Movement) has been spreading internationally and proselytizes itself as a major player not only in the realm of conservation but also in the broader field of architectural culture. Indeed, Oregon has already established another chapter of DoCoMoMo to bring awareness to this style of Oregon’s architectural history. We who are members are in the process of showcasing this somewhat eccentric period leveraging the marvelous wonders of modern tech.

What is it about the modern movement that brings about organizations like DoCoMoMo and the MCM League celebrating the age of Dick Van Dyke and brutalism? Perhaps it was the emergence of new machines and cities as Denzer suggests that brought about a fresh way of viewing design and therefore can be noted as an extraordinary evolution in our global culture; an entire generation of designers steeped in the idea of blending form with function.

It is the pervading law of all things organic and inorganic,
Of all things physical and metaphysical,
Of all things human and all things super-human,
Of all true manifestations of the head,
Of the heart, of the soul,
That the life is recognizable in its expression,
That form ever follows function. This is the law.
– Louis Sullivan

In his paper, “Motion as modern way of expressing architecture”, Gorczica leverages animation software as a case study for architectural form. Capturing the fluidity of motion from a structure is another example of design meets media and as such, the lines between the world of engineering and the graphic design/animator converge. This is an extraordinary methodology for exploring concepts and creating new ideas with less creative constraints than ever before.

What will be said of our generation of designers? What legacy will we leave behind? What will our infrastructure look like and mean to our children? Perhaps more importantly, what will they learn from us?