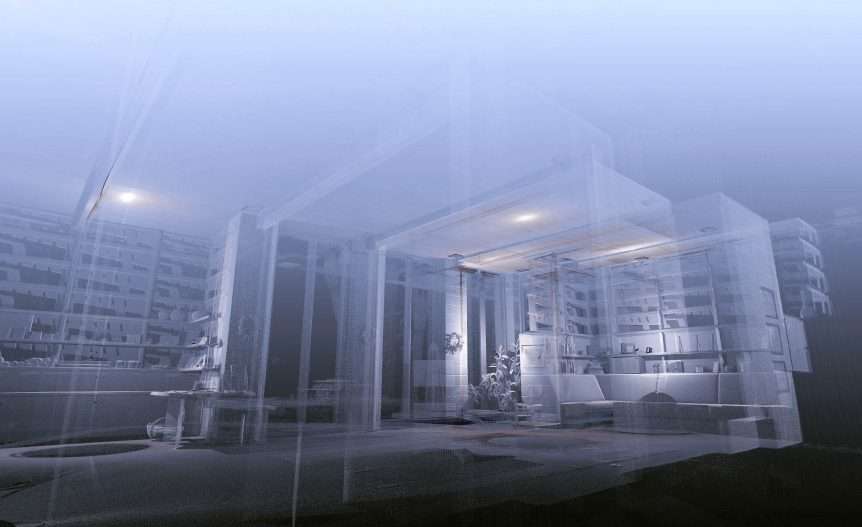 Every child brings with him into the world the natural disposition to see correctly what is before him, or, in other words, the truth. If things are shown to him in their connection, his soul perceives them thus as a conception. But if, as often happens, things are brought before his mind singly, or piecemeal, and in fragments, then the natural disposition to see correctly is perverted to the opposite, and the healthy mind is perplexed. – Friedrich Froebel

Pop quiz – what do Albert Einstein, Frank Lloyd Wright®, Charles Eames, and Buckminster Fuller have in common, besides their common brilliance with design?

As I was wandering around this historical work of architectural art, I noticed small little toy blocks strategically placed on various counters and shelves. The ‘curator’ of this house – ‘Molly’ – was incredibly knowledgeable on the history and origins of Wright’s designs. She told me that these blocks were used to teach children how to make connections with their perceived world and the real world in a conceptual context. Meaning, children, through the use of ‘Froebel’s Gifts’, were taught about form, relationships and trained to make their somewhat fragmented experiences make sense in context with the bigger picture of nature and the human experience. Fascinating. It also turns out, the more I read about Froebel – the inventor of kindergarten – the more I was inclined to believe that our modern educational system is completely inferior to 150 years ago. Teachers of those days may not have understood quantum mechanics as we do, but they certainly honored the process of learning from play (not just expending energy for the sake of the next nap time), training from the ground up, and mentoring in a structured educational context.

I felt generations of public school children had been cheated. I know, tell me something I don’t already know, right?

Occasionally, there are teachers that hone in on a young person’s aptitude and identify strategic methods to teach based on a student’s natural learning style, simply from a space of kindness or self-interest. But as a standard, the methods our culture implements to work with students in an extensive way occurs in unique environments for identified students such as special education, TAG, and GATE. Provision of unique attention to young students is sort of the pie-in-the-sky educational environment and requires considerable observation and time from the teacher, I recognize. Ideally, this is a parental role. Environmental sociological factors certainly play a key role in a person’s development and knowing some very gifted people throughout my social circles – some of which have little confidence in their own abilities – reminds me of these somewhat sad factors of inattentiveness from the developmental stages of their lives.

There has been some level of misuse of Froebel’s Gifts through modern gaming companies that print letters on wooden blocks as we know them today and, for many parents, blocks are not much more than a chew toy for teething babies. But, as The Republic of Childhood suggests, there is an incredible number of lessons that can be taught from these simple design tools.

So how does one learn to design? Perhaps it starts with a basic understanding of existing principles with expansion from that position. Perhaps it takes a little bit of play and a lack of attachment to “doing things right.” This author didn’t learn to really play until he was about 33 years old. Maybe it’s that magic number 33 (The death of Jesus, John Belushi, etc.), or perhaps it was a minor derailment of stories that were no longer self-serving or serving anyone else for that matter. My experience came in the form of a person I’ll call ‘Pepe’. His gift was leadership and the ability to organize a large number of people behind a cause. I fell under his spell I suppose. I came from the plan-a-lot-before-you-do-anything school, and to be honest, a healthy fear of failure. Ah, developmental programs…

Something he did for people is coach them, spend time with them, even if he didn’t fully participate in one’s goals or aspirations. He observed, suggested, encouraged and took whatever people were giving a shot at, seriously. And he didn’t charge tuition.

There are many teachers for different stages of life and my experience tells me that openness to each of them is a gift, regardless of when they show up in our lives. I recall being criticized for publicly speaking about my methods with animation and workflows. The critique came from a position that competitors would simply take my ideas and make business for themselves… My position is that generally, there are always people out there that know more than I do, I appreciate free learning as much as I enjoy teaching, and to think that I have a limited number of ideas and should hold onto them for fear of exploitation is simply ridiculous. The best ideas are built through synergy and collaboration and credit almost never rests on a single person’s shoulders.

So the question for me is: Can we choose to teach, to invest in one another for the sake of cultural forward motion? What prices are we willing to pay for this investment? What am I willing to pay?

This is not always the American way, but it is a ‘way.’